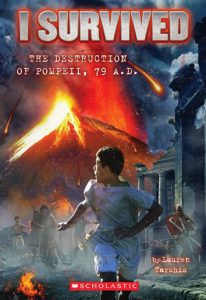 I survived the Destruction of Pompeii, AD 79 by Lauren Tarshis
Copyright 2014
Historical Fiction

*Spoiler Alert* I survived the Destruction of Pompeii, AD 79 by Lauren Tarshis tells the story of a slave, Marcus, who saves his father, Tata, from being thrown into the gladiator fights. Marcus and Tata were slaves of a good master that took care of them. After their master passed, they were sold to his nephew, Festus. He on the other hand was mean to his slaves and sold Tata right away and kept Marcus for himself.
While Marcus was in the city of Pompeii carrying Festus laundry to be clean, he felt the Earth shake. The people of Pompeii didn’t think much of it because it occurred often, but nothing came of it. As he was walking down the street, Marcus was warned from a beggar that the city of Pompeii was in trouble and will be burned down. Marcus didn’t believe the women though. After, coming down the streets were the slaves who were going to be in the gladiator fights that evening and Marcus saw his father Tata in the parade. Marcus came up with this plan to save his father and take him away from being in the fight. When Marcus saved Tata, they got on a horse and rode off towards the mountain of Pompeii.
They stayed there overnight so the hunters would not find Tata or Marcus. However, in the earlier morning Marcus was awoken by Tata because of the harsh smell of sulfuric acid in the air. Tata wanted to know how gas could be above ground since its normally underground so they climbed the mountain. As they were climbing they realized there was no life on the mountain like usual. Something was off. Then they saw a dead herd of sheep on the mountain. There were no battle wounds to the sheep which made Tata realize they needed to get off the mountain because it was going to erupt. They needed to warn the people of Pompeii.
To find out what happens to Marcus and Tata I recommend you read this book. Overall, I give this a book five out of five stars. I gave it a high rating because the author took a historical event and turn it into a story. This helped me be more interested in the book since I normally get bored of history, but the story kept me intrigued. Also, the few illustrations helped me make a little movie in my head to better help me picture the event.