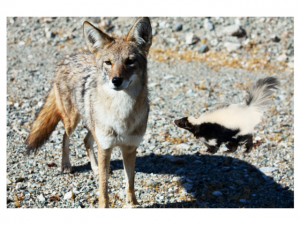 Coyote was going along one day, feeling very hungry, when he met up with Skunk. “Hello, brother,” Coyote greeted him. ” You look hungry and so am I. If I lead the way, will you join me in a trick to get something to eat?”

“I will do whatever you propose,” said Skunk.

“A prairie dog village is just over that hill. You go over there and lie down and play dead. I’ll come along later and say to the prairie dogs, ‘Come, let us have a dance over the body of our dead enemy.'”

Skunk wondered how they would ever get anything to eat by playing dead and dancing. “Why should I do this?” he asked.

“Go on,” Coyote said, “puff yourself up and play dead.”

Skunk went on to the prairie dog village and pretended to be dead. After a while, Coyote came along and saw several prairie dogs playing outside their holes. They were keeping a distance between themselves and Skunk.

“Oh, look,” cried Coyote, “our enemy lies dead before us. Come, we will have a dance to celebrate. Let everyone come out and then stop up the burrow holes.”

The foolish prairie dogs did as he told them. “Now,” said Coyote, “let us all stand in a big circle and dance with our eyes closed. If anyone opens his eyes to look, he will turn into something bad.”

As soon as the prairie dogs began dancing with their eyes closed, Coyote killed one of them. “Well, now,” he called out. “Let’s all open our eyes.” The prairie dogs did so, and were surprised to see one lying dead. “Oh, dear,” said Coyote, “look at this poor fellow. He opened his eyes and died.  Now, all of you, close your eyes and dance again. Don’t look, or you too will die.”

They began to dance once more, and one by one Coyote drew them out of the dance circle and killed them. At last, one of the prairie dogs became suspicious and opened his eyes. “Oh, Coyote is killing us!” he cried, and all the survivors ran to unstop their holes and seek safety in the burrows.

Skunk then stood up, laughing at how easily Coyote had worked his trick. He helped gather up some dry firewood and they began roasting the prairie dogs that Coyote had killed.

The cooking meat smelled so good that Coyote decided he wanted to eat the best of it himself. “Let’s run a race, he said. “The one that wins will have his choice of the most delicious prairie dogs.”

“No,” replied Skunk, “you are too swift. I’m a slow runner and can never beat you.”

“Well, I will tie a rock to my foot,” Coyote said.

“If you will tie on a big rock, I will race you.” Skunk replied.

They decided to race around the bottom of the hill. While I am tying this rock to my foot,” Coyote said, “you go ahead. I’ll give you a start and then catch you.”

Skunk began to run and was soon out of sight around the hill. Coyote tied a rock to his foot and followed, slowly at first, but he soon kicked the rock loose and doubled his speed. Along the way, however, Skunk had found a brush pile, and he dashed in there and hid.

As soon as he saw Coyote go racing past, Skunk turned back to the fire. He raked all the roasted prairie dogs out of the coals, except for two small bony ones that he did not want.  Then he cut off the tails and stuck them back in the ashes, and carried the meat away to the brush pile.

Meanwhile, Coyote was still loping around the hill, confident that Skunk was running just ahead of him. As he hurried along, he said to himself, “I wonder where that fool Skunk is? I did not know that he could run so fast.” He soon circled back to the cooking fire and saw the prairie dog tails sticking out of the ashes. He seized one and it slipped out. He tried another one, “”Oh, but they are well cooked,” he said. He tried another one. Then he suspected that something was wrong.

Taking a stick, Coyote raked through the coals, but he found only the two bony prairie dogs that Skunk had rejected. “Someone must have stolen our meat,” he said, and then ate the two small tasteless ones.

Skunk, who by this time had feasted on the delicious meat, had crept to the top of the hill and was looking down at Coyote. As Coyote began searching all around to see who might have stolen the meat, Skunk threw some prairie dog bones down upon him.

Coyote glanced up and saw him. “You took all the delicious prairie dogs!” he cried. “Give me some of them.”

Coyote begged and begged for some of the delicious prairie dogs, but while he was still pleading, Skunk swallowed the last morsel of meat. He was a better trickster than Coyote.