In the near future, I hope to attend either the Corning’s Summer Science Internship or a program at the Massachusetts Institute of Technology (MIT) called Minority Introduction to Engineering and Science (MITES). Through either of these experiences I plan to gain necessary skills for my future career path. The first is an internship through Corning Incorporated in the STEM field and through this I aim to learn more about the careers in my field of interest. The MITES program is a six-week summer academic enrichment program. If I attend this program I hope to enhance my academic standards and develop necessary skills to succeed in my future.

This winter, I went to a job shadow at Corning Incorporated at Sullivan Park. This experience really helped me, but not as you would expect it to. This job shadow while it was extremely interesting and very educational, however I discovered that the jobs I watched performed were not for me. All the jobs that were explained to me were in the STEM field, but they were not what I wanted. All of them were very heavily based on knowledge of chemistry. While I don’t mind chemistry and I’m good at it it’s not something that makes me happy. I discovered that when I go into the STEM field that I must do something that is highly hypothetical and very heavily math based. This experience, while it didn’t show me anything I wanted to do, helped me discover what I didn’t want to do. 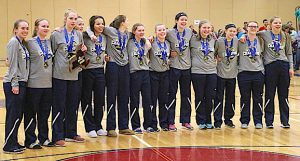 girls basketball team, that I am captain and starter of, was the weekend of March 18-19, 2017, we won our schools’ second state title ever, the second state title in a year for our school. The reason that this experience was so incredible, other than winning a state title, was the way we won. Going in to the fourth quarter of the states finals game against Port Jefferson, we were down by 16 points, however we didn’t let this get us down. We went back into our press and began to come back little by little, chipping away at Port Jefferson’s lead. With 8.6 seconds left in the game we were tied 63-63 and we had the ball. One of my teammates with one second left threw up a shot and it went in; we won the game with that buzzer beater, 65-63. This game truly taught me perseverance and to never give up even when the odds are against you. We all had one goal and that was to win that game and if I didn’t have such amazing teammates we never would have had the success in that game that we did. The thing that made this game such a learning experience and so hard for me at the same time was I fouled out with about 45 seconds left to stop the clock and give us a chance to get the ball back. Even though it’s hard when you have to sit on the sideline and can’t do anything to help, I had complete faith in my teammates and that they would do what was necessary for our team to succeed as a whole and they did just that.

One last experience that I have learned from is my summer job. I work at the Watkins Glen State Park as a lifeguard at their pool. This position has been so 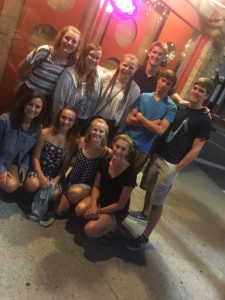 educational because every single day at the park we train for situations that we may encounter. The skills I’ve honed in this job is teamwork, communication, being flexible and adaptable, and problem solving. Lifeguarding requires a lot of communication and working with a team because you’re on such a tight time frame, you only have seconds or minutes before you lose a victim and every single second counts. So, to work quickly and effectively, you have to work well with your team and communicate a lot. Furthermore, being flexible and adaptable is huge part of this job, too. You never ever know what you’re going to encounter on a day-to-day basis, so you must be able to be flexible and adapt and also problem solve. More often than not, everything will not go as planned and you have to be able to think quickly and adapt to the situation. Moreover, you must deal with new situations every day whether it be dealing with a patron or doing a rescue, nothing is ever the same.