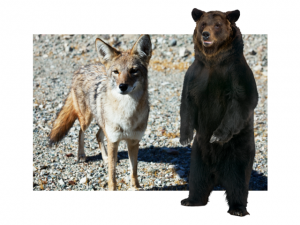 Once upon a time, Bear and Coyote chanced to meet at a certain spot, and sat down to talk. After a while Bear said, “Friend Coyote, do you see what good land this is here? What do you say if we farm it together, sharing our labor and the crop?”

Coyote thought well of it, and said so; and after talking, they agreed to plant potatoes in partnership.

Coyote agreed, and when the time came they plowed the place with a sharp stick and planted their potatoes. All summer they worked together in the field, hoeing down the weeds with stone hoes and letting in water now and then from the irrigating-ditch. When harvest-time came, Coyote went and cut off all the potato-tops at the ground and carried them home, and afterward Bear scratched out the potatoes from the ground with his big claws and took them to his house.

When Coyote saw this his eyes were opened, and he said, “But this is not fair. You have those round things, which are good to eat, but what I took home we cannot eat at all, neither my wife nor I.”

“But, friend Coyote,” answered Bear gravely, “did we not make an agreement? Then we must stick to it like men.”

Coyote could not answer, and went home; but he was not satisfied.

The next spring, as they met one day, Bear said, “Come, friend Coyote, I think we ought to plant this good land again, and this time let us plant it in corn. But last year you were dissatisfied with your share, so this year we will change. You take what is below the ground for your share, and I will take only what grows above.”

This seemed very fair to Coyote, and he agreed. They plowed and planted and tended the corn; and when it came harvest-time Bear gathered all the stalks and ears and carried them home. When Coyote came to dig his share, he found nothing but roots like threads, which were good for nothing. He was very much dissatisfied; but Bear reminded him of their agreement, and he could say nothing.

That winter Coyote was walking one day by the river, when he saw Bear sitting on the ice and eating a fish. Coyote was very fond of fish, and coming up, he said, “Friend Bear, where did you get such a fat fish?”

“Oh, I broke a hole in the ice,” said Bear, “and fished for them. There are many here.” And he went on eating, without offering any to Coyote.

“Won’t you show me how, friend?” asked Coyote, fainting with hunger at the smell of the fish.

“Oh, yes,” said Bear. “It is very easy.” And he broke a hole in the ice with his paw. “Now, friend Coyote, sit down and let your tail hang in the water, and very soon you will feel a nibble. But you must not pull it till I tell you.”

So Coyote sat down with his tail in the cold water. Soon the ice began to form around it, and he called, “Friend Bear, I feel a bite! Let me pull him out.”

So Coyote waited. In a few minutes the hole was frozen solid, and his tail was frozen fast.

“Now, friend Coyote,” called Bear, “I think you have him. Pull!”

Coyote pulled with all his might, but could not lift his tail from the ice, and there he was, a prisoner. While he pulled and howled, Bear shouted with laughter, and rolled on the ice and ha-ha’d till his sides were sore. Then he took his fish and went home, stopping every little to laugh at the thought of Coyote.

There on the ice Coyote had to stay until a thaw liberated him, and when he got home he was very wet and cold and half starved. And from that day to this he has never forgiven Bear, and will not even speak to him when they meet, and Bear says, politely, “Good morning, friend Coyote.”