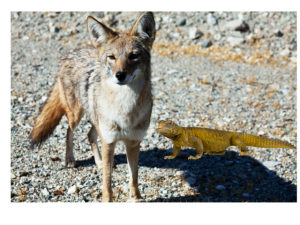 Coyote was always happiest when he was spying on someone or prying into his business. One day, when he saw a group of lizards playing a game that was strange to him, he trotted over to learn all about it.

The lizards were gathered on the top of a big, flat rock with one sloping side. They were taking turns sliding down that steep slope on small flat rocks. Each time, after his slide, the slider picked up his rock at the bottom of the slope and carried it up the hill on his back.

Coyote trotted over to the rock and sat down nearby. The lizards pretended not to see him. They went on with their play, as if he were not there at all.

Coyote didn’t like that. He wanted to be noticed at least. He moved a little closer and began talking to the lizards.

”You seem to be having a lot of fun,” Coyote said. ”What do you call your game?”

”We just call it sliding,” one lizard said.

”Sliding, eh?” Coyote was trying hard to be friendly. ”It looks so interesting I’d like to join you.”

All the lizards  turned and looked at him coldly. ”You are not a lizard, ” one of them said. ”Go play your own games. You don’t know ours.”

”But I can learn,”Coyote insisted. ”Really, it looks very simple. I’d just stand on the rock and slide down. Let me try it.  Just once.”

”This game is very dangerous. You’d get killed,” an old lizard told him. ”The first time you would be all right, but the second time, when you ride the big rock, you’d  be smashed  flat.”

Coyote didn’t believe a word of that.  None of the lizards had been smashed so why should he?  He kept  begging  them  to let him try it,  just  once.

”Well, just once, Cousin,” said the oldest lizard after hearing Coyote begging. ”You can ride the small flat rock, but don’t ask to ride the big one.”

Of course Coyote intended to ride the big one also, but he didn’t say anything about that at the time. He decided  to try  the little one, and show them how well he could do it. Then he would persuade them to allow him to try the big one.

The lizards looked sour as they placed the small flat rock in position for him. ”I don’t know why you want to play our games,” one of them said.  ”I happen to know you have lots of games to play.  I’ve seen you chasing cottontails and kangaroo rats and all sorts of creatures.  I should think running races  would be more to your liking. You are a faster runner.

Coyote didn’t answer.  He stepped out on to the flat rock.  It tilted down onto the runway and “zip” away he went like a streak of lightning.  Before he reached the bottom of the slide, Coyote jumped off.  He picked up the rock and trudged back up the hill with it.

The lizards looked at him sternly.  The oldest one said, ”We warned you. We didn’t want you to try the big rock, but your life is your own. If you want to risk it in this way, its your own fault if you get smashed flat.”

The old lizard told the young lizards to get the big rock for Coyote, they  moved away silently and came back with it. They placed the big rock on the edge of the runway. Then they stood back.

Coyote was not at all afraid.  He ran out onto the rock, tipped it a little, and once more he was sliding very rapidly down the runway.  The big rock caught on a smaller one half way down the slide. The rock flipped into the air, taking Coyote with it.  Coyote was frightened half out of his skin.  His ears were flopping and his paws were clawing the air. He wasn’t at all proud of himself, as he had been on the first ride.

He hit the ground and rolled over.  He saw the big rock coming down on top of him. ”I should have listened,” he thought. ”I’m going to be smashed flat,  just as they said.” Then the big rock fell and smashed Coyote.

The lizards stood looking down at him. ”Poor, foolish, Coyote,” the oldest lizard said.  ”He’s no friend of mine, but still it makes me sad to see him smashed so flat.”

”And right in the middle of our runway,” said  one of the young lizards.

”It would be right to leave him there. But he’s going to be very heavy for us to move,”  said another. ”It would be simpler to bring him back to life,” said a third lizard, ”Then he could leave without us having to move him.”

”You have a very good idea, said the oldest lizard.” Come on boys.” Single file they slid down to Coyote and made a tight circle around him so they could work their magic in private.  In their own secret manner they brought him back to life.

”Now go on your way, Coyote,” the oldest lizard told him. ‘ ‘And after this don’t try to play lizard games.  We don’t want this to happen to you again.”

Coyote was glad to be alive.  He got up and dashed for home as fast as he could run.